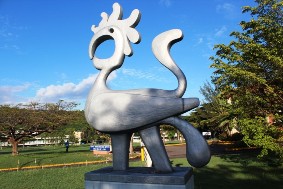 A quick note on the image. This wonderful sculpture stands outside the Caribbean Institute for Health Research - home of the Jamaican Sickle Cell Unit. It is an aluminium sculpture of a stylised bird by the Jamaican sculptor Ronald Moody. The sculpture depicts Savacou, the god of storms and thunder (from the Carib word Sawaku meaning heron). It was a gift from Professor Archie Cochrane - originator of the Cochrane Collaboration - and it is fitting that the Caribbean Cochrane Centre is now housed on the same site.

The sickle-cell unit of the University of the West Indies has operated Jamaica’s only comprehensive sickle-cell centre since 1973. In the 27 years to December 31 1999, 7262 patients had presented to the clinic. Also in 1973, the Jamaican Cohort Study of Sickle Cell Disease (CSSCD) was initiated by Professor Graham Serjeant, to investigate the natural history of the disease. Continuous MRC funding was provided until 1999, when the Jamaican Sickle Cell Unit passed into the management of the University of the West Indies - operated by the then Tropical Medicine Research Institute, now Caribbean Institute for Health Research.

CSSCD participants were initially identified from neonatal screening of 100,000 consecutive non-operative deliveries at a single hospital location; 552 cases of sickle-cell disease were identified, 315 of which were homozygous for the haemoglobin-S allele. Data on haematology, biochemistry, and anthropometry were collected according to a predefined visit schedule, and participants were encouraged to attend the day-care medical facility when sick, at which time information on clinical complications was recorded. Clinical support is available free of charge to anyone with sickle-cell disease.

The Sickle Cell Unit continues to care for people living with sickle cell disease, and has an active haemoglobinopathies research programme. The cohort work continues.

The research at the Jamaican Sickle Cell Unit has been the collective effort of scores of scientists, who have produced many hundreds of peer-reviewed articles. You can find my contributions as part of my publications list. Search for “sickle” and you should find most of them.

Professor of Biostatistics and Informatics